It is our honor to introduce Elizabeth (Liz) Deligio, this year’s Wendy Davee Award for Service recipient. Liz’s deep commitment to social justice has been an inspiration to faculty and students at Pacifica.

Liz Deligio is an MA alumna from the Community Psychology, Liberation Psychology, and Ecopsychology specialization of the Depth Psychology Program at Pacifica Graduate Institute in Carpinteria, California. Her projects span three continents and focus on some of the most crucial social justice issues of our times.

Currently Ms. Deligio works for the 8th Day Center for Justice in Chicago, a non-hierarchical, consensus-based social justice community. 8th Day is grounded in values of nonviolence, mutuality, and cooperation. At the center all members share responsibilities for everything from cleaning to creating a budget. Ms. Deligio’s primary work has been focused on issues of antimilitarism, gender justice, and economic justice.

For the past two years, Ms. Deligio has worked with survivors of police torture in Chicago to establish the Chicago Justice Torture Center, the first center of its kind in Chicago. The center creates a space for restoration for individuals and the larger community, a container for memory in particular the history of the torture survivors, and as an incubator for praxis and theory regarding police violence and pathways to restoration from the impacts of the violence.

While a theology student at the Catholic Theology Union in Chicago in 2005, Ms. Deligio served as a chaplain for the Misericordia Home in Chicago, which serves developmentally and physically challenged individuals. She attended demonstrations for peace and justice throughout these years, and wrote for the Franciscan Sisters of Perpetual Adoration blog about justice and peace issues.

Interviewed by Jeff Fleischer of Mother Jones news in 2005, Ms. Deligio stated, “I’m coming from a Christian perspective. I really believe that we’re called to live in community with one another. If I live in a place of privilege where I can protest without being killed, murdered, tortured or have my family disappeared, then I feel you have to be a voice for those who can’t speak out for themselves.” Ms. Deligio has gone to jail for her convictions, however. Arrested with four others for trespassing on government property during a peaceful demonstration in Georgia, she was fined and served three months in jail.

Since 2006 Ms. Deligio has been a member of the Ethics Commission, a project of the Inter-Ecclesial Commission for Justice and Peace and the Movement of Victims of Crimes of the State in Colombia. It is a human rights commission that meets with victims of crimes of the state to open spaces for testimony, dialog, and the calls for reparation and justice denied by state structures. She represents the School of the Americas Watch on the Commission.

Ms. Deligo began working with The Afghan Peace Volunteers (APV) in 2013, a youth peace organization from Bamiyan, Afghanistan. APV has formed partnerships with groups around the globe working on issues of war, peace, and occupation. Ms. Deligio assisted members of APV to make videos to share with students in the United States about their life under occupation and their hopes for the future.

Added to this compelling body of social service, this year Ms. Deligio has been working in collaboration with the Corporate Accountability Lab (CAL). CAL is a start-up nonprofit that seeks to prevent corporate impunity for human rights and environmental violations through new legal remedies, grass roots organizing and an inter-faith articulation of a “theologies of the commons.” CAL seeks to hold corporations accountable for harms they commit while changing social and cultural understandings regarding our relationship to land and people globally.

None of these are easy and straightforward projects. They contest militarism, state violence, and misogyny, but, even more importantly, create and embody justice, community, and collective healing and resilience. We are delighted and proud to award Elizabeth Deligio with our 2017 Wendy Davee Award for Service. 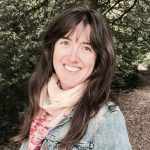