Pacifica has been a place I have returned to on many occasions. I first came to the Lambert Campus for my admissions interview.  I had the not-unexpected nervousness of anyone applying for a doctoral program.  I was surprised by the soft vivid green beauty of the campus ground—flowers, trees, grass, Nature awash with color.   The smell of lemons in the neighboring orchard was pungent.  I remember on that interview day two brown horses walking a slow pace with saddled women riders on Lambert Road.  The aliveness of sensations from that day has been repeated many times over the years.  It is a part of my memory of crossing the threshold and entering Pacifica’s treasured land.

This is a place I have known as home for decades now.

I can understand that this knowingness was there even when I was not consciously aware of my closeness to what I had studied and experienced at Pacifica.  There is the knowing that comes from the intellectual understanding of having spent chronological time at a particular place.  There are the memories of having spent time in a classroom for eight hours in one day—legs tired, mind fuzzy. Then there is the knowing that develops somewhere else in consciousness.  This kind of knowledge seems to almost come from hindsight.  It is the recalling of the gargoyle that sits watchfully near the library.  It is the recollection of former cohort laughter as we sit at the Best Western over drinks on a Saturday night.  Exhausted, but still wanting to share more of what we had seen and heard after hours of being together in class all day.

The beauty of the Pacifica campus landscape invites joy and eases suffering.

When I attended school at Lambert I was already in the body of an older woman.  My youth had passed and yet I was excited and elated as I had been as a child about to experience a new adventure. This was simply at the prospect of taking my plane ride to Los Angeles.  Leaving Berkeley, headed for Pacifica for my weekend was an adventure.  I could also leave behind me whatever problems or unpleasant events were occurring at home.  I was free to explore some part of my existence that wasn’t so easily accessible as a wife and mother.  Being within the mystical and magical arms of beautiful trees was a once a month respite.

Three years went by very slowly in one way and yet went all too fast.

After the three years, I found reasons to return to Pacifica as I worked on my dissertation.  This was a time when it didn’t seem so much like home.  When I visited the library I was alone.  The voices of my cohort members were like faint echoes, distant in their absence.

Birds flew freely around the grounds, cacti grew tall next to the reception building steps and Mark Kelly remained to tell me stories about the best books to read.  More trees were planted and the older ones grew taller.  On those visits during the writing of my dissertation, Pacifica was minimally the same on the “outside” but my connection to the people and the land was deepening.  After the three years and my return to New York, the time spent on campus became less frequent.  Instead of time in the Lambert library and walking pass the prayer wheel my cohort had contributed to the campus grounds, I was spending time in the Brooklyn College Library, working on research for the dissertation.

I missed the walk from the Library to the Studio—missed the smell of flowers I could not name, but will always recognize their fragrance.

It seemed like a very long time before I officially returned for my oral defense.  It was longer than I had anticipated.  Two She Crab Sisters—women from my cohort came to listen to my talk on African American women dreaming.  The year-long interview project had concluded after years of literature review research in New York.  Returning for the oral defense was a sincere return to home—a place that I had felt the absence of without realizing how much it had meant to me the short years I had visited monthly.

There has not been another moment like the day of the oral defense—each moment at Pacifica has it’s own unique character and weight.

The day I had the admissions interview was so unlike sitting and listening to James Hillman lecture.  Each one of these events and others were a reminder of how fortunate I was to have a place where I could work on dreams and dreamtending.  I hadn’t found any other place in the world like Pacifica. As the years passed I found this to be increasingly true.

The years away from Pacifica meant remembering something that was awakened in me as I wrote down my dreams, rode the number 4 train to see my analyst and became used to no longer being a doctoral candidate but a Ph.D. I didn’t know that this time I was becoming even more enriched by my learning as someone who could remember just a sliver of a poem from Between, the Pacifica student publication, and workshopping with Sharon Olds.  The interface between the subtleties of my Pacifica journey and the obvious starkness of New York City life encouraged me into analytical training to become a Jungian analyst. I wanted to return home and it appeared to be the best way.

More years passed and I became more of the person who had a remembrance of Jonathan Young talking about mythology my first quarter at Pacifica.  I could hear a calling of experiences from the past seeking to join with the contemporary life.  Returning to Pacifica as Core faculty was my response.  It was unexpected and yet no surprise.  It was a necessary return to a place that will always be home. 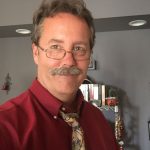 Everything Converses by Craig Chalquist2020 Blog